Home Beach Most Beautiful Beaches In and Around Constanta, Romania

In the hot summer months, the Romanian coast is crowded, and the beaches are full. No wonder the authorities made the decision to enlarge some of them. The city of Constanta, the largest city on the Romanian coast of the Black Sea, has three areas where people can go relax next to the sea.

One of the most beautiful places is Modern Beach, in the center of Constanta. The access from the city is made on the steps that descend from the Modern Seafront, a place of promenade preferred by the locals and tourists, on the other hand, guarded at the north end by a circular tower block, right at the intersection of Mircea cel Batran Street with Ferdinand Boulevard.

Modern beach, as its name says, is quite contemporary with very fine sand, with a width of 100-200 meters. The entrance to the sea is smooth, the water having a very shallow depth. It has lifeguard services and is equipped with recreational facilities, terraces, restaurants, football fields and volleyball, etc. 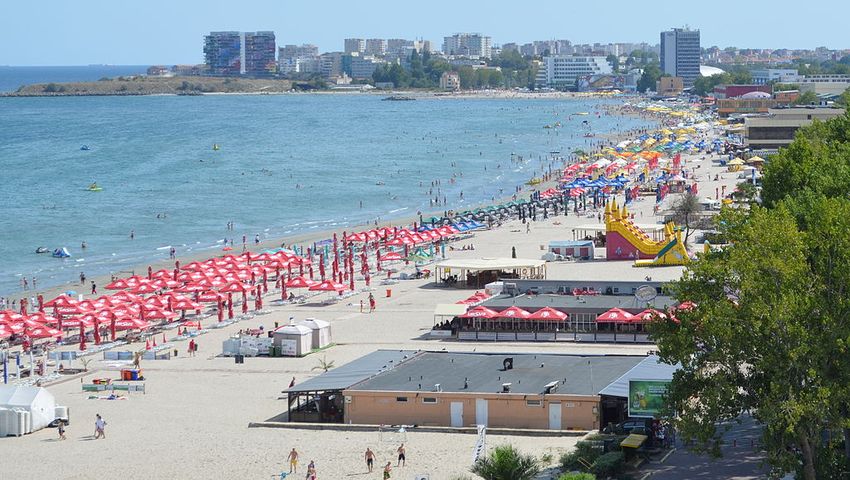 The next location is 3 Papuci Beach, which is reached from Mamaia Boulevard, by descending the cliff on a series of concrete steps. This beach is wild, unpaved and rather narrow. The entrance to the water is slightly difficult, as it is surrounded by stones.

Going to Mamaia resort, you can reach the third destination, generally preferred by locals or tourists staying in the area: Faleza Nord Beach. It is divided into two sections: the one from the south is wild, and the one from the north, it is arranged with sunbeds and umbrellas.

Once you arrive in Constanta, you can also visit the sights. Genoese lighthouse, is the construction that gave the name of the football team “Farul Constanta”. Located near the famous Casino, the lighthouse is 8 meters high and is the oldest building in the city of Constanta. It was built between 1858 and 1860 by a British company, called Danubius and Black Sea.

If you leave from Bucharest to Constanta and want to visit more beaches, you should rent a car from Kamoauto. Then, after enjoying the 3 beaches in Constanta, you can visit some other destinations nearby. And they are listed below:

Mamaia, the most famous resort on the Romanian coast, is so appreciated because of its beach. With a length of 8 km and a width of about 200 m, it is perhaps the most cared for on the whole coast. It is narrower in the south, but widens to the north, where all the luxury hotels are located. Decorated with sunbeds and umbrellas, with bars offering refreshing drinks, Mamaia beach is one of the liveliest in Europe.

The next one is in Navodari, and it is just as wide, but a little quieter and maybe less populated. In recent years, however, the resort of Navodari has grown a lot, with more and more tourists preferring it to the busy Mamaia. And here are terraces, bars, sunbeds with umbrellas, water sports, but there are also some quieter areas.

In recent years, the resort of Venus has become very popular for Romanians, and this especially to the luxury hotels built there. People love the baby friendly hotels, but also the large beach, 1.2 km long and 200 m wide.