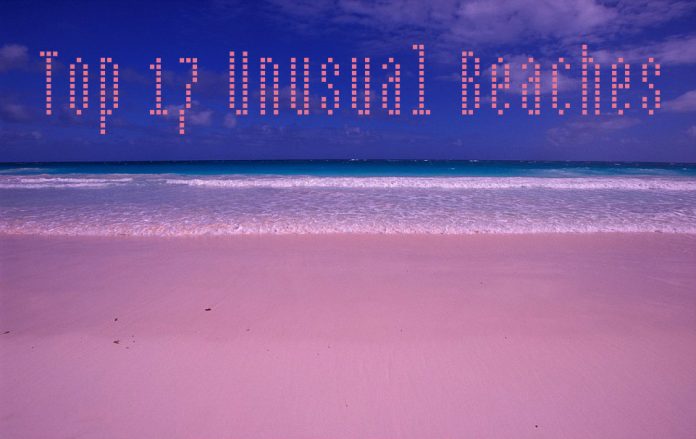 You would be surprised to know how many different kinds of beaches there is. Not all of them consist of yellow or white sand or gravel. There are beaches of different colors, and those who are black or green (which is rare) tell us that they originated from the volcanic remnants. Bermuda has pink beaches that are colored by corals. Now that you get a general idea let’s check out the most unusual beaches in the world.

The Glass Beach is located near Fort Bragg in California, USA. The locals used this location to dispose of the trash, but dumping was prohibited eventually, and the glass sand is all that is left.

According to reports, this wonderful and unique beach was formed after the island was a site for the Mexican government which used it for target practice in the 1990s.

Microscopic bioluminescent phytoplankton illuminates when it hits the surface, which is why this beach glows in the night.

14. The Beach of the Cathedrals, Ribadeo, Spain

When the water pounds against the rocks for thousands and thousands of years, you get these wonderful cathedral-like arches!

The pink sand beach in the Bahamas got the color from the remnants of washed-up coral. The pink-colored sand is not something you see every day!

When the airstrip is located next to the beach, occasionally, a plane will fly just over your head. Hold on to your drink and prepare for the noise!

The white chunks of ice are scattered all over this beach in Iceland, which is tar-black since it is formed by volcanic activity.

The Koekohe Beach in New Zealand has a lot of large and amazing rocks that look like Dragon eggs.

The sand here is green! How cool is that?

Another beach that has the green sand is located in Hawaii, and the color is caused by the mineral olivine.

Believe it or not, this giant’s Causeway was formed around 50-60 million years ago. Basalt lava rose to the surface of the earth hot and boiling, and it left this beautiful terrain as it cooled down.

The most famous black-sand beach in the world is called Punaluu, and it is located in Hawaii. Just like it is the case with other black-sand beaches, this one too is formed by basalt lava which exploded and rolled into the sea, suddenly cooling down.

The reason why the sand at Rabida is red is that of the oxidation of iron-rich lava deposits. Furthermore, there is the possibility that the coral sediments washed up to the shore. Most likely, it is combination of both.

The water near Shell Beach in Australia is salty enough for the cockle clam to increase in number without being disturbed by its natural predators. Therefore, this beach is covered with tiny shells washed up by the water.

When manganese garnet deposits in the surrounding hills erode into the sea, you get purple-colored sand. It is unusual but magnificent!

Iceland’s most intriguing beach is called Vik, and it has a black sand dark as night. It is nothing surprising since the island is home to a lot of volcanoes.

The Algarve consists of limestone, and when it erodes, it forms stunning caves right there on the beach! This is just one of the numerous caves!